It seems a long 10 days since we ventured up the M4 to visit the Hampton Court Flower show for the first time. We were fortunate to enjoy pleasant sunny weather with only a single shower, and were hugely impressed with the standard of the show gardens, having previously only managed a couple of visits to the smaller, and more compact Shrewsbury Flower Show. In particular we really enjoyed the design and planting of ‘Wild In The City’ which was an award-winning design by a student, Charlotte Murrell from Sparsholt College, which took as its theme the opportunity to create a restful urban environment which was also a haven for biodiversity and wildlife. This was particularly enjoyable since we had a chance to meet the designer, and Anne who’d floated the idea of visiting the show in the first place, had another close friend who had been involved with the execution of the design.

Surprise on finding the rampant, down here, Rosebay Willow herb being sold to visitors to the Hampton Court Flower Show 6/07/11

We were very surprised to see that some nurseries were selling native Rosebay Willowherb as a garden plant. Here at Gelli whilst we allow a bit in the wilder parts of the garden, it would completely take over given half a chance. We also managed to buy a few more small Clematis from a nursery which we’ve bought from at Shrewsbury Flower Show with good results. But more on Clematis perhaps next week. 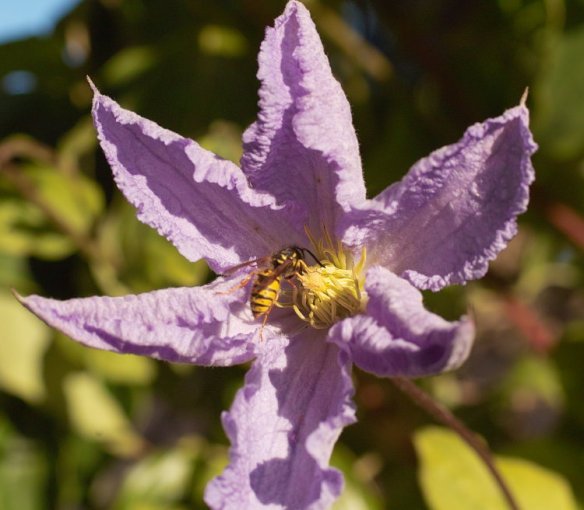 We also spotted a few new plants which might fit our mix of insect friendly flowers to grow at Gelli, but I made the fateful mistake of bending double to try to view the conceptual garden winning design, which consisted of a raised bed of turf with a few metal viewing periscopes around the periphery. These allowed one to glimpse collections of mushrooms which were ‘growing’ beneath the turf. I joked with the young woman handing out leaflets that perhaps they had been sponsored by an osteopath. Little did I think that after a prolonged journey home, courtesy of the inevitable M25 queue, I would be experiencing the tell tale twinges of an impending back flare-up. Suffice to say that after the usual 36 hour delay, I was in considerable discomfort and for a few days, incapacitated. All very frustrating, but at least it didn’t linger for too long this time.

Which is just as well, since the garden seems to have got its second wind after a warmer week, and a short deluge on Tuesday. As the tomatoes increase in size in the greenhouse, and I anticipate my first ever home-grown tomato meal, I thought I’d mention how the greenhouse was constructed and excavated, in the light of some recent temperature measurements.

The site was limited by having to be cut into a shale bank, so after levelling, it made sense to get some greenhouse borders dug out, to be filled with top soil from the PV site, which had already been levelled. A chance comment by our JCB wielding friend, half way through the excavation resulted in a sleep deprived night as I imagined and planned in my head a heat store central pathway, using some spare envirogrid paver grids, which our son had passed on to us, and which had been languishing for a suitable use to present itself.

The pictures below are hopefully self-explanatory as to how the greenhouse base, beds and path came to be constructed. Originally the plan was to use a battery and inverter operated fan to suck warmer air from the apex of the greenhouse down into the central channel filled with rubble stone to provide a thermal store to reduce the damage from extreme frosts. In the end the plan failed miserably, since the sudden shock plunge in temperature in November meant that the greenhouse door froze, and I wasn’t able to gain access for a few days. Then this spring, the second-hand fan located at the base of the 4 inch black ducting towards the gable end of the greenhouse gave up and I haven’t got round to replacing it. 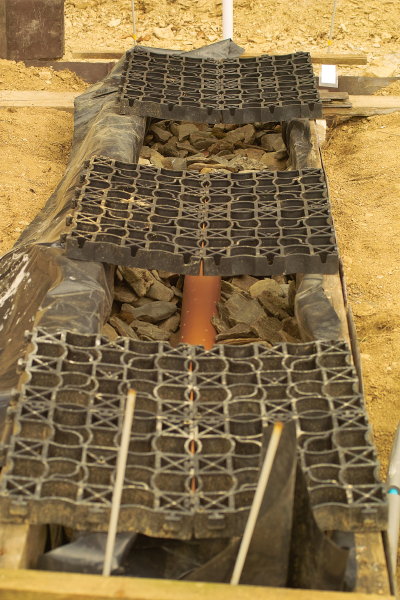 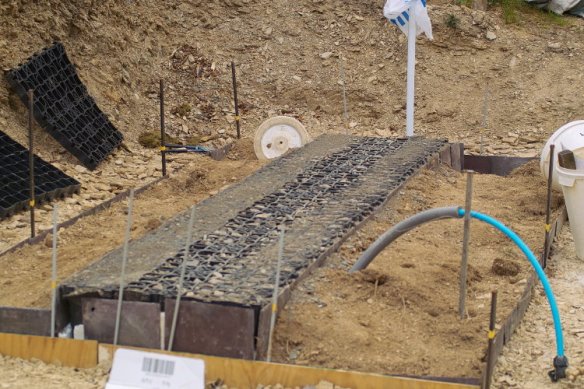 Concreting the base for the greenhouse 07/10 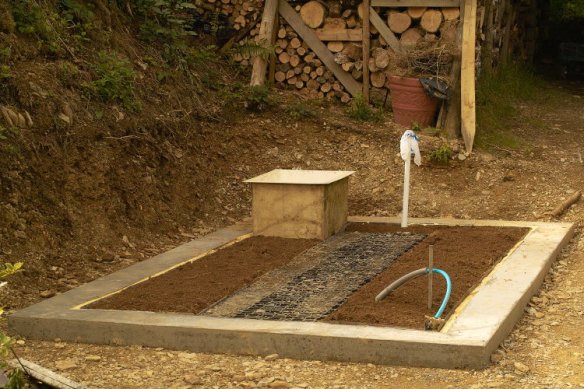 Now all we need is a greenhouse…

Craig and friends from Woodpecker joinery arrive on a typically wet August day, and leave the site in very muddy clothes…

However I was intrigued to see that in the recent hot weather there has been an obvious surface temperature gradient across the width of the central pathway. In addition the black pipe which rises to the apex of the greenhouse, and connects to the under-path perforated soil pipe, has an even higher surface temperature. This leads me to think that the black pipe above ground may well be creating an up-draught of warm air, which will in turn tend to be drawing air from the greenhouse into the stones of the central path, thus maintaining the plus 4 degrees C temperature differential which I’ve recorded. (In the winter months I’d also detected a 3 degree C differential and without any heating was able to overwinter a few tender pot grown cuttings like Escallonia bifida and Eupatorium longifolium). The greenhouse does have 4 thermostatically operated roof-light windows, but I need to open the door as well to varying degrees depending on weather conditions to regulate temperature and humidity. Whether some bright physicist knows a formula for working out the flow rate through a pipe of this diameter, with the observed temperature gradient, I don’t know. My attempts to research this interesting query on google failed miserably.

Central pathway surface temperature of 41.5 degrees C 13/07/11 All the following temperature readings were taken on the same day at about the same time in full sun. 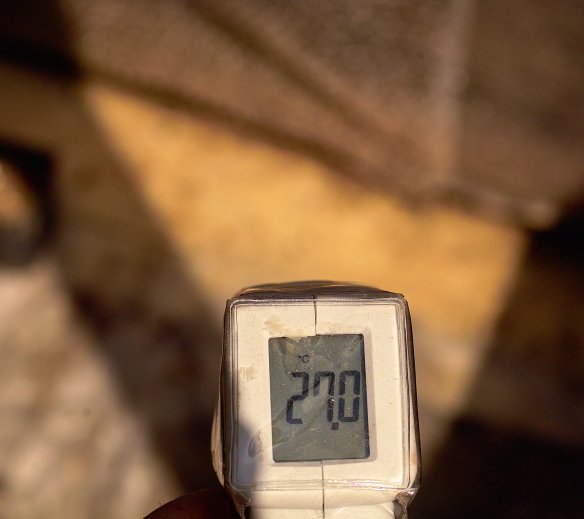 The ducting run to the apex of the greenhouse. Being black walled and ribbed should aid heat absorption, and consequently warming of the air that passes up through it. But how fast will this air move, in cubic metres per hour ??

My feeling is that this raising of inside temperatures with the aid of the central channel heat store may prove really helpful as we get into August and September where temperatures of over 15 degrees C will be necessary to allow tomato ripening to take place assuming that light levels are as gloomy as is typical in many Augusts up here.

The sweet peas, which I’d started last autumn and overwintered in the greenhouse are now in full flow, and producing a profusion of flowers for cutting. 5 seeds were sown per 2.5 litre pot in October in the greenhouse, and then about 5 pots planted out per tyre. There were a few fatalities because of the hard winter, but right now you’d never know since they are so vigorous. I shall definitely try to save some seed this year and perhaps grow twice as many, i.e. 4 tyres worth next year. Fiona left with a beautiful bundle of flowers today to visit her mother who has now happily settled into her new home. 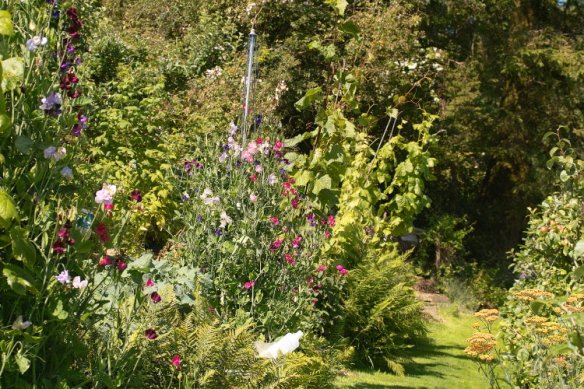 I’ve also just sown the collected Tulipa tarda seed by surface scattering it about in the mossy copse. A surprising quantity of seed being produced from perhaps just a dozen seed capsules generated from perhaps 300 bulbs. I’m hoping that in due course, I’ll produce a population of T. tarda which is more at home in the Carmarthenshire hills.

And this point leads me to mention the Real Seed Catalogue. 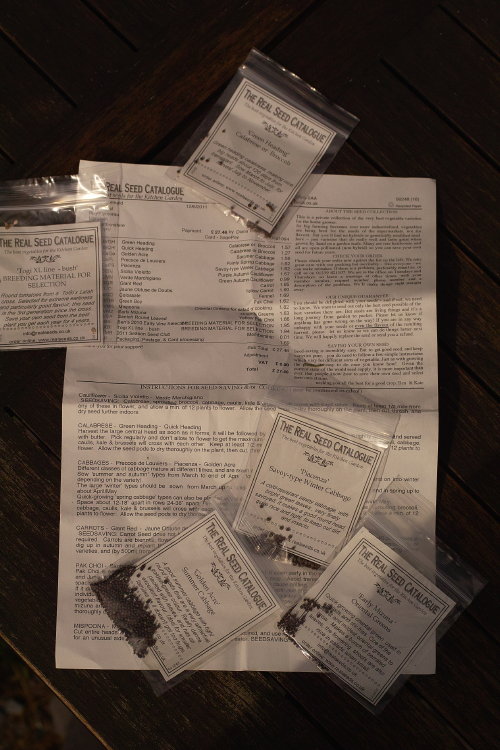 The no fuss, generous seed from the Real Seed Catalogue

I read about this small firm some 3 weeks ago. They have an excellent website, and what appealed to me was that they have a limited range of seed varieties, but they are all ones which they have personally tried and tested for garden vegetable suitability. As I’ve got older, I’m getting better at concentrating my efforts on vegetables which I know that I can grow and will crop reasonably well up here. This year may be my last attempt at growing winter squash, since so much seed seems to give plants which don’t produce any squash in time in our climate up here, and my other gripe has been how many seed companies are becoming very stingy with numbers of seed per packet.

So I was really pleased to see that the seeds ordered from Real Seed Catalogue arrived promptly, were well packaged, had very good seed quantity per variety and came with a personalised guide to saving your own seed as well as good guidance on sowing and cultivation. In the past I’ve been caught out with seed from ebay, where you leave feedback, only to find that when the seed gets sown, it fails to germinate. I’m pleased to report that on this front as well, the seed from Real Seed has so far performed extremely well with good, even quick germination. Of course the proof of the vegetable is on the plate, but at least getting successful germination is 70% of the battle. The other point that I should mention is that the company is based near Newport in Pembrokeshire, so is geographically a more similar climate to ours than many of the East Anglian seed companies. 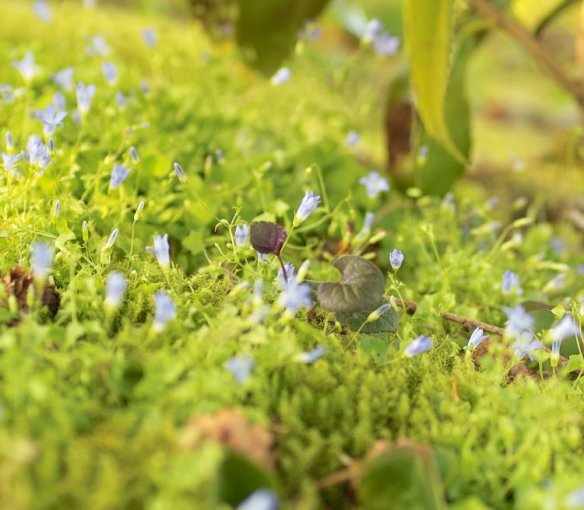 The native pretty Ivy-leaved Bellflower, which we grow with moss, Violets and Wood Sorrel underneath our Camellias 13/07/11 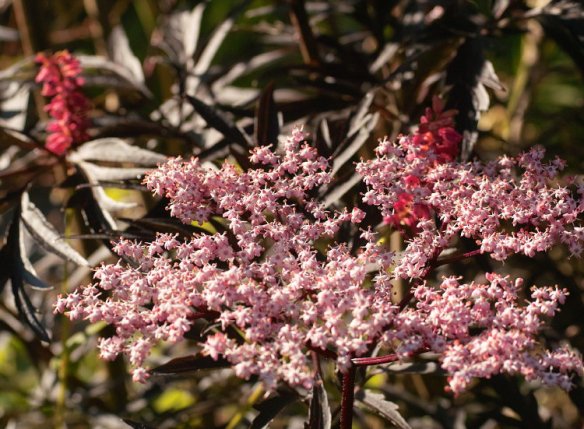 Worth lying down for the photo….even after upsetting your back. Evening light through field seed heads 13/07/11

Finally, I’m including a picture of a noctuid moth apparently nectaring from a head of grass seed in our top field a couple of weeks ago. Of course grass flowers don’t produce nectar, so I guess that there must be some other secretion or water that it was imbibing, but it was an interesting sight after just updating my blog pages on the ‘Waltz of Attraction’, and the evolution of nectaries to attract pollinating insects. It clearly was inserting its proboscis in between the seed heads to gain access to something. Also as I write this up, I thought I should tell you which moth this is, and then realised as with the earlier post on Mother Shipton, I wasn’t 100 % sure. At first I thought it was a Clay, but then checked that there is a similar recent colonist moth called the White-Point, which in the description of Flight Season from the excellent Waring and Townsend book, says that the moth ‘can be found on grass heads after dark’. So perhaps this is another new species for me and Gelli? I shall try to confirm its identity in due course.