Fiona is used to getting excited shouts from me to ‘Come and have a look at this’, usually at pretty inconvenient times, and often after dark! One such happened a couple of nights ago when I went out about 9 pm armed with a torch, to see what was going on – not just looking for moths, but at this time of the year our Rhododendrons are afflicted with leaf munching weevils. I’m not sure if they’re vine weevils, there are anyway certainly more than one species, some being really quite big chaps. Squishing them after finding them helps limit numbers, but they have a fantastically well developed survival mechanism of dropping to the ground at the slightest disturbance, and then playing dead, so if you miss them first time, you’ve lost your opportunity until the following night. Also lest you think I don’t have anything better to do in the evenings, it’s a very seasonal event – like animal ticks they seem to have a spring and an autumnal population spurt, in between these periods and they’re pretty inactive.

However its surprising how often you see or hear something unexpected, when you go out at this time. This particular night my sight was taken by a band of flames and smoke on the far side of the valley. Periodically local farmers do burn off fields of rushes at this time of the year when we have a long dry spell. The night was completely still, with no sound apart from the odd lamb bleating, and then the local pack of foxhounds started baying about 4 miles away – whether they’d heard the burning or smelled the smoke, I don’t know. 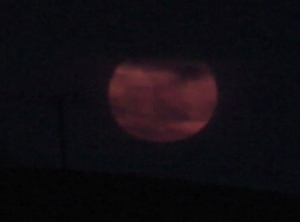 Over the last year I’ve similarly been fortunate to spot this month’s ‘Supermoon’, when the moon was at it’s closest to the earth for 18 years, on such a foray, as well as 2 lunar halos,

(the first of which involved getting F out of the bath, to ‘Come and See this!’), and on last New Year’s Eve, a ‘Once in a Blue Moon’ event when there was a second full moon, in the same month.

Many of the local rough grazing fields nearby are home to rare butterflies and moths like the Forester Moth and Marsh Fritillary, and how these species which overwinter as immature larvae survive this annual event is beyond me, but I guess that this type of land management has been used for decades, so somehow or other enough larvae escape incineration to keep the populations going. 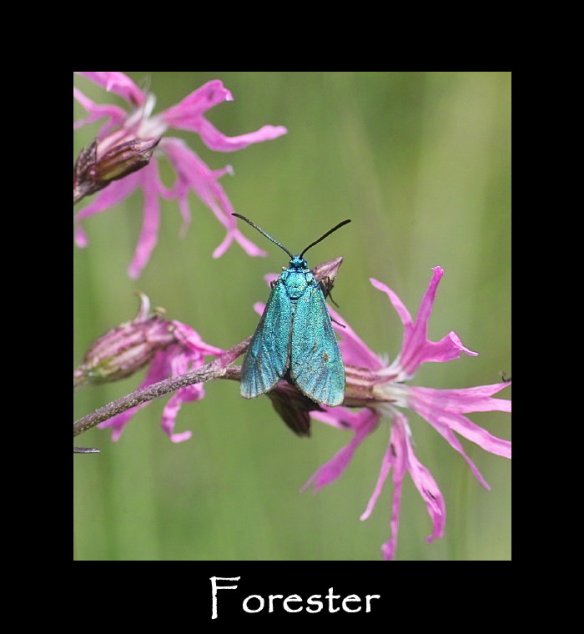 The flames coincided with flowers opening on our Tulipa ‘Flaming Purissima’. These were planted last year for the first time along with T. ‘China Pink’, sunk into as big pots as we had to hand, and plunged into very poor ground before being top dressed or mulched with slate chippings. Last year they gave a gorgeous display, though about 2 weeks later than this year, but really tulips are a risky thing for us to grow up here with the high rainfall. In the autumn, I’d lifted a few of the pots, removed the bulbs and dried them off before storing them in a barn. 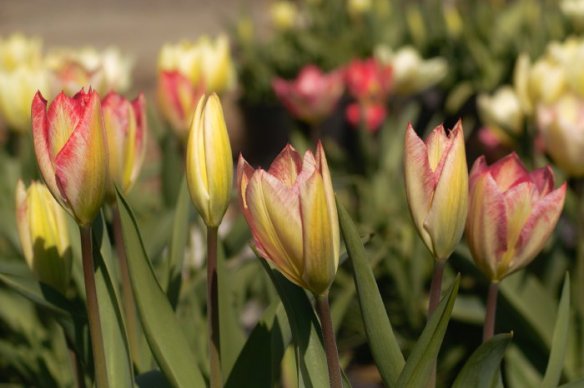 This had been such a fag, that I hadn’t completed the job, and then with the very early winter hadn’t got round to replanting the bulbs that I had lifted – the end result was that the stored bulbs were all eaten by rodents in the barn before I noticed and was able to plant them up. 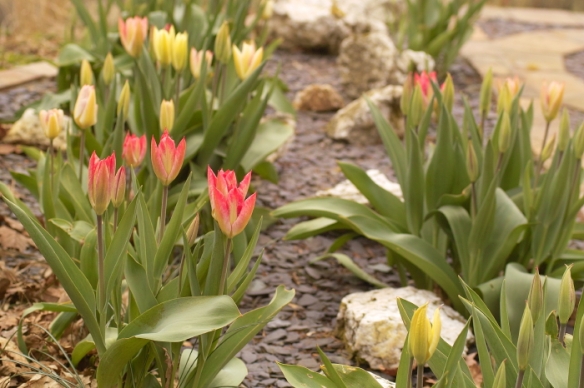 Tulipa ‘Flaming Purissima’ late March 2011, after overwintering in pots in the ground

But here’s the interesting point – the ‘Flaming Purissima’ left in their pots, in the ground, look great this year with healthy foliage and 30 % more flowers than last year. Of course unlike Narcissi, tulip bulbs tend to completely divide at the end of one year, and you get several smaller usually unproductive bulbs the following year, and are also very prone to disease in high rainfall areas. So why the success? Perhaps the hard winter, and perhaps the mulch of slate chippings helped, by exposing them to higher temperatures in the summer, but I shall see whether we get a third year from them. Like everything in the garden, they get no fertiliser other than a top dressing of neat wood ash, from the stoves, just after flowering, and again as they start into growth. They’re so lovely that I would accept replanting every three years, but I’m afraid annual replanting of tulips, or regular lifting and drying bulbs is not for me. I should add that I think the particular variety is also very important here, since the ‘China Pink’ has unhealthy foliage, and will produce very few flowers. Another T. fosteriana, like white ‘Purissima’ and ‘Flaming Purissima’ which has worked really well for us before, but again fell to the rodents this year after lifting, is a yellow and white and slightly earlier variety called ‘Sweetheart’. 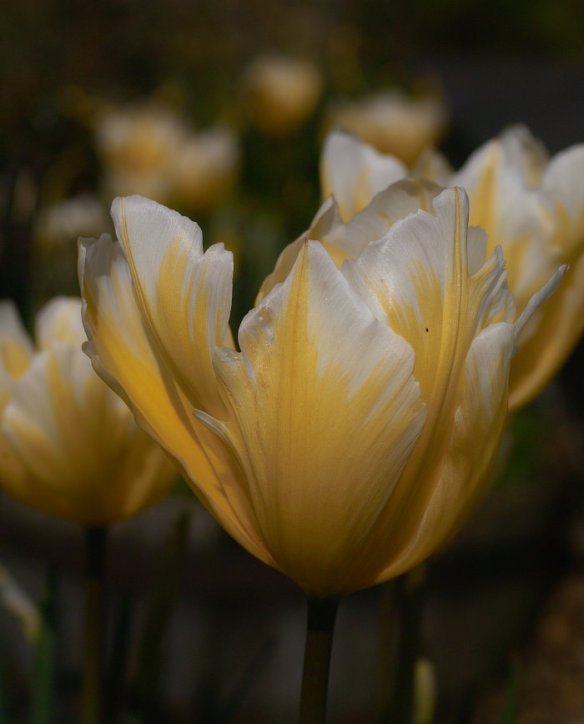 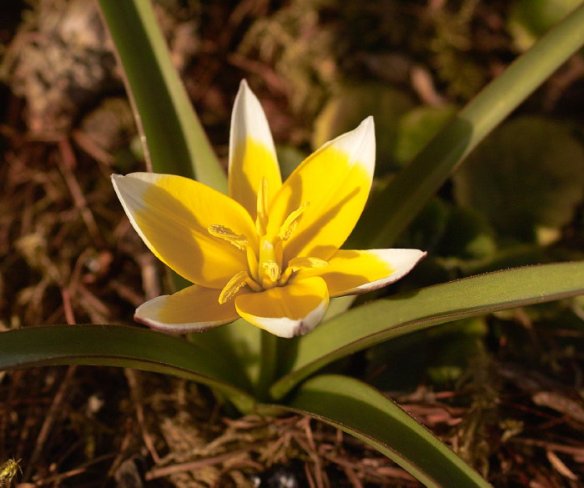 Meanwhile the Tulipa tarda (daystemon) in the copse has also done well, and again it’s flowering earlier this year. There are a few low growing dwarf species which offer us a better chance of success with growing them in the ground, rather than containers. Last year I hand pollinated these flowers, since I saw few native insects on them, and saved the seed to sow into a nursery tyre. This had germinated well, but yesterday I discovered a cluster of seeds complete with seed husks growing amongst moss close to a Saxifrage fortunei. These look a lot healthier than those in the bare soil in the tyre -a similar experience to what I’d noticed with the Crocus tomassinianus seed. Why is this? Higher humidity, or temperatures, or again some nutrient mix from being in a natural undisturbed seedbed? 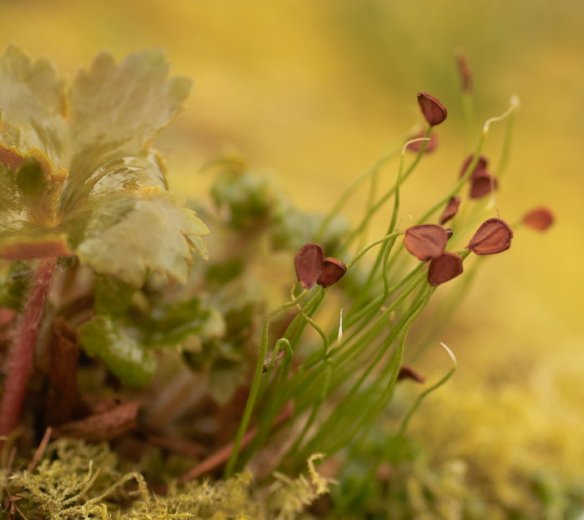 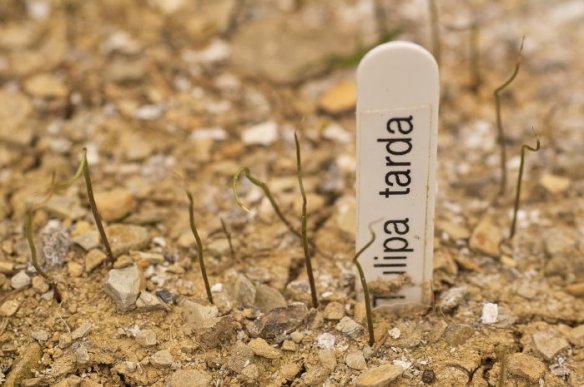 Perhaps in future I’ll sow underneath a mossy blanket, to see if this is a significant factor. The above-seed soil in the tyres was freshly moved from our topsoil heap. and perhaps lacked normal fertility. I’m keen on raising species like this from seed, partly for the cost saving, partly for the challenge, but also I reckon that you end up with a population of plants that are better suited to your particular growing conditions whether that is soil, rainfall, temperatures, or even fungi/mycorrhizal influences. I have had similar experiences with Anenome blanda. 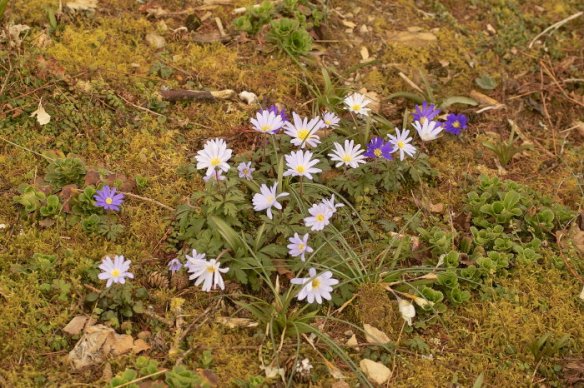 Out of about 100 hundred bought in planted corms only 3 or 4 survived and flowered more than twice, but by hand pollinating these flowers, I now have a new generation that is slowly seeding around in the copse, and also amongst the cobbles at the end of the house, a location where it would be impossible to plant the corms anyway. This is another plant where this year I think that instead of collecting and sprinkling the seeds over an area, I’ll roll back the moss, and place the seeds just beneath, for hopefully even better germination rates. Finally the first colour is just seeping into the buds of Tulipa ‘Little Beauty’…a shockingly vibrant flower, which I’ll feature a bit later on.

I’ve now planted out all the broad bean plants which for the first time I’ve mainly grown in small pots in the greenhouse, after first pre-germinating the seed inside, much as you would do with beansprouts. 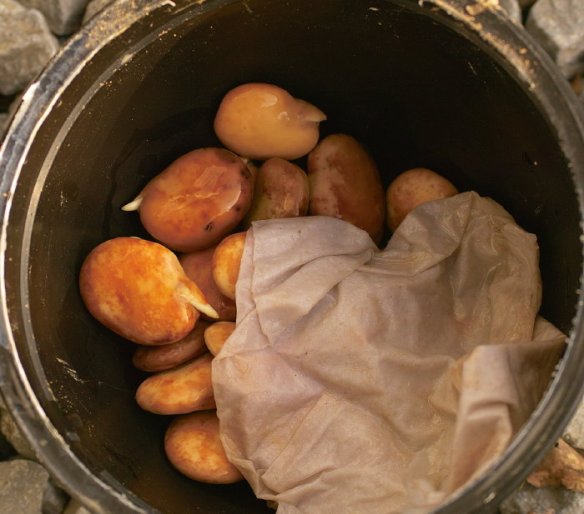 Basically for peas and beans, once the root has appeared, I plant them up in pots, and hope to steal a few weeks early season growth. Protecting them against late frosts being the risk, but enviromesh seems to work pretty well on this front. 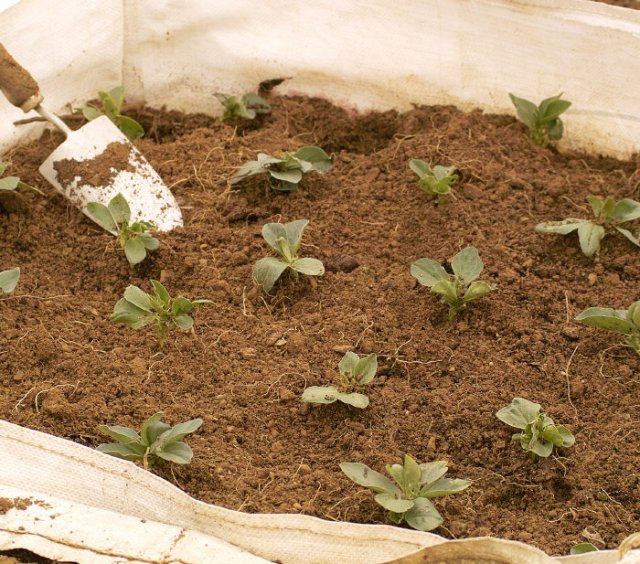 Finally to answer one of my questions from the last blog on how mycorrhizal fungi spread, I tracked some information down, and there are 3 potential ‘propagules’ for most species of this type of fungus. (Propagule is a word I hadn’t encountered before, and I wonder how it’s pronounced?)

Secondly even small sections of root from a plant which has already been colonised, and has the characteristic coils or arbuscles of the fungus within its roots. (In a research paper, the experiment to see how long it took germinating Ginseng seeds to establish a mycorrhizal root relationship, used chopped up leek roots as the source of the fungal ‘infection’, and fungal strands were developing in the seed’s root within 11 days). So should we be leaving roots of some plants behind in the ground, when we cultivate an area?

The final mechanism is the production of underground spores which germinate and then fungal strands will grow from these towards the host root. One thing does seem obvious though, and that is that these fungi are so ubiquitous that there’s little point in paying money to buy them in to use to inoculate your plants to encourage growth. The other interesting point here is that all these mycorrhizal fungi are far more common and numerous than the saprophytic fungi which break down dead tissue and produce above ground spore forming bodies, or mushrooms, which we tend to associate with wild fungi.

Like the vibrant Red Elf Cup shown below. Fiona found this yesterday on a log in our woodpile, and it’s photographed here with a very pretty Cardamine trifolia, which is flowering just now with us, underneath our big Oak. 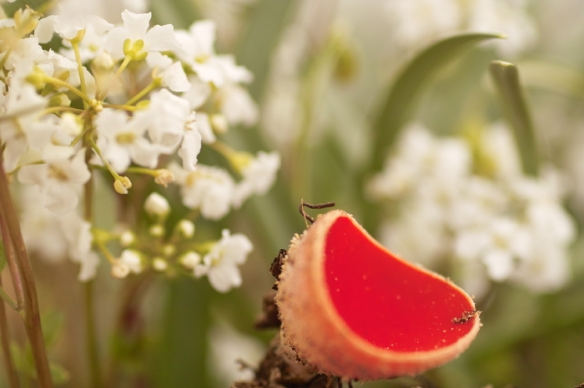