The temperatures haven’t improved much here over the last week. Still little rain, and some quite frosty nights, so it’s only in the last 2 days, that Narcissus “February Gold”, and N. obvallaris, the Tenby Daffodil have struggled to open and join N. Tête-à-tête‘. However four nights ago we had a bit of cloud cover at night, so I thought I’d pop out to see if there was any significant moth activity. ( For those who don’t know me, over the last 8 years, I have become fascinated by the diversity, numbers and ecology of these undervalued insects, and produced a DVD-ROM to try to encourage others to look out for them in the garden.) Although it was barely above freezing, and there was a biting northerly wind, I headed for the one plant which I’ve discovered is a magnet for them at this time of the year in our garden. This is Daphne laureola philippi, which is a European evergreen Daphne which only grows to about 60 cm, and has insignificant yellow-green flowers from late February for 6  weeks or so. I wasn’t disappointed, and saw about 20 moths nectaring on the flowers, and a few resting nearby. Many moths don’t in fact feed at all in their adult stage, but it’s clearly an advantage for the moths illustrated, to get some additional energy in such low temperatures (as with bumblebees they have to raise their flight muscle temperature to over 30 degrees C by shivering, to enable flying to be possible…not easy without the added warmth of the sun’s rays, in such chilly conditions). 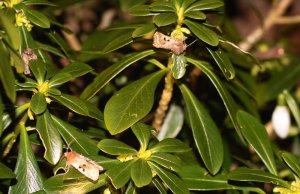 Whilst the moths flying at this time of the year are by no means the prettiest that you see in the garden, I have to admire their hardiness which requires them to emerge and mate in such inclement weather. And they are very successful, this species being present in their hundreds in our garden in many years, way before any self-respecting butterflies have emerged. On the same evening I even saw, and photographed one resting (?) inside the flower of a snowdrop about 10 metres from the Daphne. This was a real piece of synchronicity, since in all my years of looking at moths, I’ve never seen one in or on a snowdrop before, and this a week or so after thinking about raised temperatures within the flowers of spring bulbs. 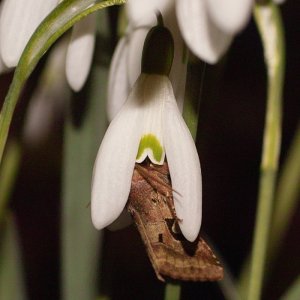 What also interests me about this Daphne, compared with other flowers in the garden, is that there are literally hundreds of others currently open – snowdrops, Hellebores, primrose, Pulmonaria, as well as some gorgeous scented Daphne, like Daphne bholua ‘Jacqueline Postil’, and I rarely see moths on any of these (very occasional sightings on the Hellebores). Which just goes to illustrate the point that flowers with wonderful scents ( to our sophisticated/unsophisticated?) noses – I can smell ‘Jacqueline Postil’ from yards away – may be of no interest at all to our native insects. In fact I have to get my nose up to within an inch of the Daphne laureola flowers to be able to smell a faint spicy, lemony scent. Recently I’ve pondered the thought that many plants which we grow from exotic climes will almost certainly have their own indigenous pollinators, mainly insects, but other species as well. But the early plant hunters who brought these plants back to our shores weren’t really interested, or able, to bring the pollinators along as well. So if, as with the classic example of the Buddleia, it’s loved by our native insect species, then great, but if not, then we’re likely to have issues with achieving good seed production without artificial intervention.

I mentioned moss and blackbirds in the post title because I’ve noticed over the last 3 years that at about the same time of the year that we start to see spring moths in the garden in big numbers, our moss paths, which we carefully nurture through the year get ripped up very impressively, but selectively, by blackbirds. The damage always occurs on the south or west of our big oak tree (oaks are THE most popular larval food plant for British moths, supporting hundreds of different species), and is usually completed over a 10 day period. Go beyond the limit of the branch overhang from the oak, in amongst the larch trees, and the moss is left untouched, as the pictures show. Actually, occasionally later in the year, the same type of moss damage sometimes occurs very close to the base of the larch trunks on the southerly aspect..

but never to the north. My suspicion is that the blackbirds are hunting for pre-emergence moth pupae. It’s interesting that most of the moth species which we find flying in the garden at this time of the year overwinter as fully formed adults within a pupa/chrysalis, (and sometimes a cocoon), which is located underground. The trigger for emergence is probably temperatures rising, (either a simple rise, or a cumulatively assessed rise over a number of days), but how are the blackbirds getting in on this hatching frenzy?

My guess is that they are hearing the moth pupae below ground as activity increases just before emergence, but I’ve been unable to find anything very specific on this subject on the internet. Blackbirds and thrushes certainly cock their head to one side to ‘listen’ to help hunt worms, but is this what they’re after here? I do know that recent work with Large Blue butterflies have shown that their larvae, which are tended underground in ant colonies, can emit high-pitched sounds which mimic those produced by other ants. Whether such noises are being emitted by moth pupae, or it’s simply the inevitable noises being produced by movements of the adult insect within the hard pupal case, I don’t know. Any information on this subject gratefully received.

But I’m convinced as happens so often in nature, that the canny blackbirds are picking up on something that completely passes us by, as a means of securing a useful meal at this lean time of the year for them. Perhaps it’s not just the worm, that the early bird will catch. Of course all this is hypothesis, but if it isn’t moth pupae the blackbirds are after, why is this frenzy so localised, in both space and time? The night after posting this, even more moths were feeding from the Daphne, including the two below (images taken from my DVD-ROM). These are both much less common than the Hebrew Character. 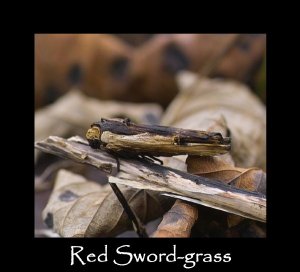 The Red Sword-grass, I’m lucky to see one or two of per year, but sometimes in the autumn, as well as the spring, whereas the Powdered Quaker, below, is one of those less common but only spring flying moths.

These photos also illustrate another important point about most night flying moths in the UK, that their survival strategy depends on staying still during daylight hours, and employing camouflage measures to avoid detection and predation, whether by wing markings and colour, or even the way the wings are held at rest as with the Red Sword-grass, where they are carefully held furled to mimic a thin stick.

Finally the tail end of the snowdrops, as the Hellebores start to take up the floral baton, in our ‘amphitheatre’. With any luck, a bit more colour in the next post. And much to my surprise I can report that 7 days after measuring night time temperatures of minus 4.5 degrees C on hairy Meconopsis grandis and Pulsatilla vulgaris shoots, these have continued to grow away successfully, whilst the smooth, non-hairy shoots of Dicentra spectabile have scorched and largely collapsed. Coincidence? Or do the hairy leaf surfaces confer a critical bit of frost protection? 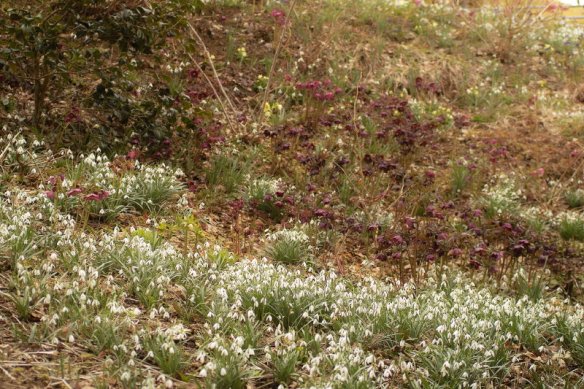